Recently I got a hold of Allan Anderson's book "An Introduction to Pentecostalism—Global Charismatic Christianity". It so happens that Anderson, a professor at the University of Birmingham in the U.K., was an acquaintance of the pastor at our church here in Land-In-Between.

Part One of Anderson's book, which was entitled "Historical Development of Pentecostal Distinctives", was interesting and very informative. It covered the subject from a global perspective, rather than being confined to events in North America. This part of the book was worthwhile. 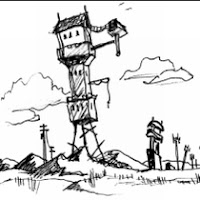 However, Part Two of the book was a different matter. It was entitled "Pentecostal and Charismatic Theology in Context". It written in a manner very typical of a modernist academician, being over larded up in places with puffy verbiage and highfalutin terminology (e.g. "Christological construct" and "pneumatological and missiological dimensions"). And, more importantly, Anderson does not write from the perspective of faith. Instead, Anderson takes his stance on that high and lofty vantage point known as the Tower of Humanist Autonomy—where Man makes himself the measure of all things, and God is reduced to a mere human "construct". Therefore, Part Two was written according to what's academically fashionable, at times veering into dreary Political Correctness. And he liked to cite Harvey Cox.

Besides that, in places Anderson flat out got things wrong. This was mostly because of his wearing the Blinders of Multiculturalism. But I guess if one is going to be a professor at a university, and maintain your tenure, wearing the blinders is very much obligatory nowadays.

Now I know how people of faith talk. People who actually believe don't go around talking as if they didn't, nor do they recite Harvey Cox as if he were some kind of authority on spiritual matters. As far as I could tell, Anderson doesn't write like a person who has any real belief in that good old, yesterday-today-and-forever blood-bought foursquare Gospel of Salvation. Consequently, Part Two was so stuffy and irksome to read that I had difficulty trying to wade through it, mostly because it was such a yawner.

If a "theology" doesn't have the effect of making you fall down on your face and worship Almighty God, then I have little use for it. The Tower of Humanist Autonomy is a castle built on air anyhow, because someone greater has arrived¹, and what he says actually matters.

But speaking of yawners, years ago when I was a spring chicken, the writings of Thomas J. J. Altizer were the big fad on campus. But who at this time can remember that even Time Magazine once celebrated him? But if at that time he was acclaimed should be no surprise when you consider what kind of outfit Time is². And I remember once trying to read something he wrote. It was clear to me then that the only way to write such rubbish is to get a PhD in theology. But does anybody remembers Altizer, other than as a footnote in somebody's doctoral dissertation or as someone mentioned in a Wikipedia article? Once it's out of Time, it passes out of mind. Nowadays the academic fads are different, and Time has moved on to other things, but the underlying attitudes remain unchanged. The heart is the same, it's just a different face. Academicians now like to dissect charismatics instead. I guess it's because they consider them to be such exotic animals.

On the other hand, while I was down in SoCal, I got to meet my wife's nephew Michael, who has the heart of a true pastor. Now he is a person of vibrant faith, and I greatly enjoyed being around him, because people of faith talk about those things that concern me the most. And I feel a thousand-fold closer to Michael than to stuffy academicians like Allan Anderson.
¹ See Luke 11:23.

² But then again, Time has often failed to discern the times. And for a very long time now, everybody at Time has been afflicted with a bad case of apistia. In this case, however, time doesn't heal all wounds.
© Posted by Oengus at 9:23 AM
Labels: books
Newer Post Older Post Home