While making a trip to Starbucks the other day, I found a postcard lying in the parking lot. The front of the postcard had a reproduction of a very old, grainy, black and white photograph. In it there are three women wearing long ruffled dresses and enormous hats repleted with what looks like flowers or feathers. They are standing on what appears to be a train station platform, for rails stretch in the background. To the right of the ladies, a man dressed in a derby hat, a suit, and sporting a thin, disheveled tie, leans on a umbrella. His hat shades his eyes as he gazes at the camera. Behind two of the ladies, is another man whose face cannot be distinguished. 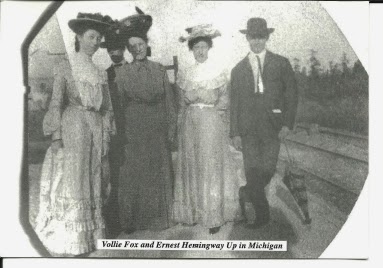 On the bottom of the photograph a caption says "Vollie Fox and Ernest Hemmingway Up in Michigan". The back of the card remains blank as no one wrote in an address or message. But another caption appears saying "Vollie Fox, owner of the Red Fox Inn, three unidentified women, and Ernest Hemingway c. 1918. Vollie taught Ernest to fish on Horton Bay in 1909." I guess the man behind the women must be Vollie Fox, and Hemingway must be the person leaning on the umbrella.

Horton bay is on Lake Charlevoix near the northern tip of the lower half of Michigan. Hemingway committed suicide at his home in Ketchum, Idaho, in 1961. This lost postcard connects itself to a member of the Lost Generation.

If someone out there values this lost postcard, please contact me. Any reward money will be cheerfully accepted.
© Posted by Oengus at 3:15 PM
Labels: America
Newer Posts Older Posts Home
Subscribe to: Posts (Atom)