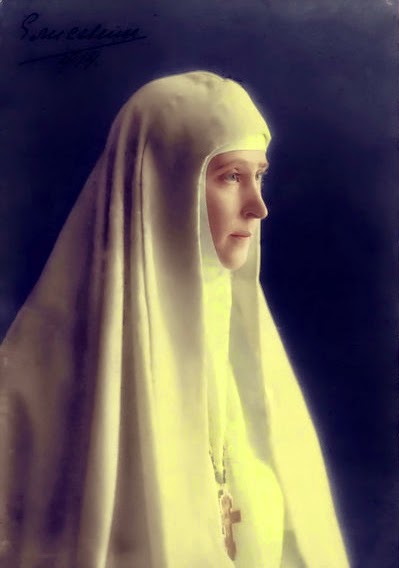 Just look at those somber eyes. She has seen a lot.

This lady was born a princess in the German state of Hesse in the year 1864. Her longish name was "Princess Elisabeth Alexandra Louise Alice of Hesse and by Rhine." The story goes that she was regarded as one of the most beautiful women in Europe at the time. She later married Sergei Alexandrovich, who was one of the sons of the Russian Tsar Alexander II. One day, an assassin threw a bomb in the carriage her husband was riding as he passed through one of the gates of the Kremlin. He was blown apart. She was not far away at the time and rushed to the scene. She was stunned but calmly helped to pick up and gather together the bleeding pieces of her husband Sergei scattered in the snow.

Just try to imagine this. When I say "pieces" I really mean that. Pieces. All I can say is "wow, just wow." Later on, she went to the prison to meet the assassin and tell him she forgave him. Think about that a minute. She picked up pieces and forgave the man who did it. And all I can say to that is "wow, double wow." Not long after this, she started a convent in Moscow. The Bolsheviks murdered her in the year 1918. Her remains were later retrieved and are now buried at the St. Mary Magdalene Convent on the Mount of Olives near Jerusalem. She is also known by the name St. Elizabeth Romanova.
© Posted by Oengus at 6:00 PM
Labels: biography
Newer Posts Older Posts Home
Subscribe to: Posts (Atom)