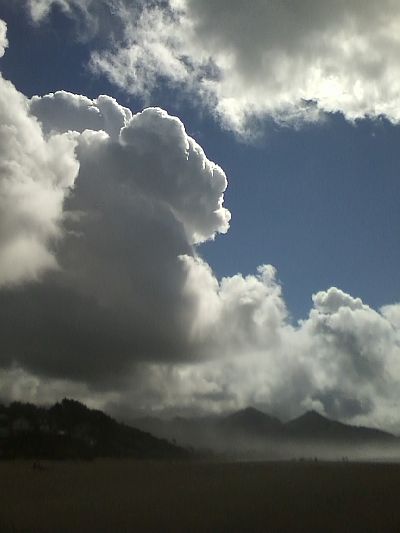 God made the place special.
© Posted by Oengus at 12:49 PM
Labels: America, vacation

More's book was a short, scholarly monograph, but it served to fill in some blanks I had about what was going on back in the 1970s and 1980s regarding the controversial "Fort Lauderdale Five": Ern Baxter, Derek Prince, Charles Simpson, Don Basham, and Bob Mumford. Of these five, only Mumford and Simpson are still alive I believe.

I had heard of "Shepherding" but I knew very little about it. I won't go into all details here. You will just have to read the book, which was well researched and well written. I recommend More's book as a good starting point.

Back around 1971, Lonnie Frisbee, at the height of success at Calvary Chapel of Costa Mesa, pulled up stakes and move to Florida to be tutored under Bob Mumford, and he was there for about five years before returning to California. Lonnie is mentioned on page 51 by name, and he was shown in a picture with Mumford and four other young men. Other than this, the book said absolutely nothing about what role Lonnie might have had during his time there. That was disappointing, as I had hoped to learn more. Lonnie did have in his autobiography plenty of good things to say about Mumford and Prince, but beyond that he didn't provide very much detail about what he did there. He did say, in so many words, that he and his wife came back bruised by the "heavy-handed shepherding experience."

More's book gives a straight forward chronological account of the how the five men came together and what they set out to accomplish and the ensuing controversies that hounded them. Their intentions were good. What actually resulted was not so good in many cases. Their "top down" hierarchical approach to training xtians to be better disciples often led to very controlling and abusive situations in the ranks, about which much has already been written by other people. More's book explains how the Five have long since apologized, and very sincerely, for the abuses some people endured, although it wasn't entirely clear to me that the Five completely recanted all of their original ideas per se. Derek Prince did state, later, that the concept of a "trans-local" pastor was not found in the New Testament. At least he said that, although trans-locality itself does live on today in the form of ministerial associations, where pastors offer to pastor other pastors.

Indeed, More does point out at the end of his book that many of the Five's original ideas are still with us today, although in a more toned-down form or using different terminology. For example, I can cite the trend in today's mega-churches to get the people enlisted in "small groups" and relating to each other. These groups usually have a designated leader who reports to higher-ups. This was just one of the Five's innovations that I think has lasted.

Make no mistake about this: Chuck Smith of Calvary Chapel detested the Fort Lauderdale Five. But I believe that Chuck's pastor-led ("Moses Model") approach to how a church is governed, if less authoritarian and having more of a velvet glove on it, has a definite resemblance to some of the Five's basic ideas. Neither side is "congregational" in polity for sure. The senior pastor is very strictly the sole leader, like Moses, and the laity the followers, who have no votes. Although the operational details on the ground might differ, leadership is strictly "top-down." Finally, the Five, like Chuck, never ceased to claim that they had no intention of starting a "denomination." Chuck died back in 2013, but Calvary Chapels are still around and still insistent that they are not a denomination. In the end, the Fort Lauderdale Five went their separate ways and receded into history. But the Shepherding Movement still lives on, at least in the sense that many of their original ideas are still with us.
© Posted by Oengus at 5:00 PM
Labels: books, Frisbee
Newer Posts Older Posts Home
Subscribe to: Posts (Atom)